Before Shenandoah National Park was founded, these lands were home for generations of Virginians. Some families lived on the same land for 250 years. 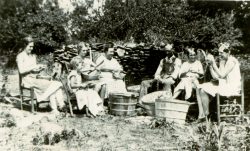 George and Emma Lamb peeling peaches with their daughters. Left to right: Rosetta Lamb, Pollyanna lamb, Lucy Lamb, Emma Meadows Lamb, George Lamb, Laura Lamb, unknown. This photo was taken on Pocosin Mountain in Greene County. The Park boundary came up to their backyard, but the Lamb home and property was not ultimately taken. Photo by Larry Lamb.

In the 1930s, over 2,000 people in eight counties in Virginia were removed from the land by eminent domain to make way for the creation of Shenandoah National Park. Over 70 years later, the descendants of those families are still carrying this forced relocation as part of their family story. JMU Libraries is helping to preserve their stories and make them more accessible to descendants, historians, and the public.

Since 2017, JMU Libraries has been supporting a project to preserve and digitize over 15,000 pages of court proceedings and other legal documents from the Rockingham County Clerk of Court’s office as part of a community/university collaborative project called Exploring Rockingham’s Past (ERP), recently renamed Histories Along the Blue Ridge. Some of the digitized documents are related to this forced relocation to create the national park.

Recently, the ERP project reached an exciting milestone when Rappahannock County (one of the eight counties who participated in the relocation) added its records to JMU’s ERP database. Now neighboring Madison County and others are catching on. The ERP team hopes that eventually all eight counties with land in the national park will make their records fully searchable by adding them to the Exploring Rockingham’s Past website. In the meantime, the project is already looking to rebrand with a new name, now that its records extend beyond Rockingham County.

This week, we spoke with Kevin Borg, a JMU history professor who was instrumental in forging the partnership between the Clerk of the Circuit Court for Rockingham County, the JMU Department of History, and JMU Libraries. 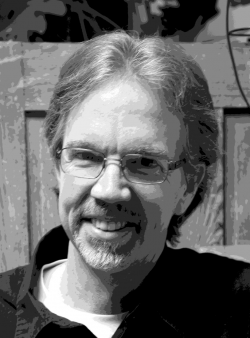 “The history department had an ongoing cooperative relationship with Chaz Haywood [’97], Rockingham County Clerk of Court. He’s a real advocate of history and has lots of stuff in [the courthouse] building that people just can’t get access to because there’s just not enough room to get people in there. He had already been working on stabilizing and preserving historic documents, and making them digitally available. I had a graduate student in 2017 who was interested in digital projects, so I connected him with Chaz, and the two of them came up with this project of making the Shenandoah National Park records digital.”

“It was a major commitment by the library to support this project. After Chaz and the student choose a set of records, the library provides space for taking them out of their original boxes, and instructs the student in organizing them, doing the preservation work, digitizing them, and then entering all the metadata into the system. Support from JMU Libraries these past two years has been crucial to this project’s success. You can just look at the website to see how many people contributed to this project, but Kevin Hegg [Director of Digital Projects and Pedagogy for JMU Libraries] has been the anchor of this thing.”

The project gained attention the day after the public unveiling of the project, when a video featuring Exploring Rockingham’s Past (ERP) was posted on social media.

“The impact of this project was deep and personal to many in the large meeting room in the Massanutten Regional Library [where the project was unveiled]. We had representatives from the Shenandoah National Park, we had descendants, we had Chaz Haywood and members of the History faculty. It was a full room. We heard stories of families who were affected by this removal. Seeing these historical records finally revealed brought some to tears. The next day, a member of the Blue Ridge Heritage Project Facebook group posted a video of the event, “Breaking Through News: The Forgotten Families Of The Blue Ridge,” which has now been viewed over 69,000 times.”

Rockingham community’s response inspired Rappahannock County and others to join the effort. 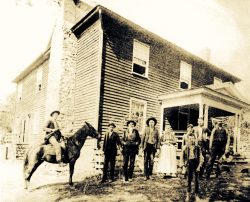 J. Bernard and Ruby Bolen and family in front of their Rappahannock County home in the 1890s. Photo credit: Rappahannock Historical Society.

“It was surprising to us how much it was welcomed and how deep the emotions were, still, several generations later. That’s what got other counties interested. Since then, Kristie Kendall, JMU history alumnus and Historic Preservation Manager with the Piedmont Environmental Council, secured private donations to support an intern from the Rappahannock area to be trained at JMU Libraries and then digitize the Shenandoah National Park removal records at Rappahannock’s courthouse, ultimately adding the digital files to the JMU-housed digital project. Courthouses in two or three other counties are getting in touch to see if they can do something similar, so this thing is getting legs of its own.” (Since the date of this interview, Kristie Kendall has started actively fundraising to expand the project to Madison County.)

This project creates a bridge between JMU and the local community.

“ERP is an ongoing collaboration between our graduate program [in History], JMU Libraries, and the Rockingham County Circuit Court Clerk’s office to preserve select historical court records and make them publicly available. ERP was launched in 2017-18 and has published a new collection each year since. In 2019, the Court’s 1920s-30s alcohol prohibition records were added, the next year they added the Overseer of the Poor records from 1766-1914, and this year they are adding the Criminal Court records from 1900-1930.”

This project also provides JMU students with exactly the kind of engaged, community-based learning that JMU aims to provide.

“Each year, a graduate student collaborates with Circuit Court Clerk, Chaz Haywood, to decide which collection to process and make digitally available. It’s a major undertaking. There will usually be one student in charge who will work closely with Chaz, and the students are paid. The history department sees ERP as a bridge between the campus and the community and an opportunity to involve graduate-level students in real-world projects that stay in and benefit the community. In return, history graduate students gain valuable technology skills and professional experience impossible to provide in the classroom.”

ERP is an award-winning project. 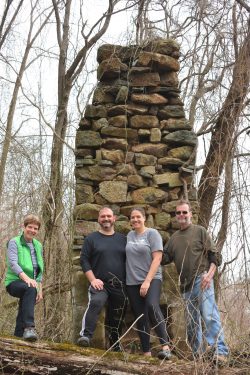 Pictured: Earl “Kit” Hawkins and his family in front of the chimney of the house where his father was born in what is now Shenandoah National Park. Kristie Kendall led the family back to the home place in 2019. Photo credit: Kristie Kendall.

Why is this work so important?

We are putting information in the hands of the people.

From Kristie Kendall: “This project is a perfect example of the crucial role that libraries serve in providing gateways of knowledge to everyone. JMU Libraries went above and beyond to ensure that not only the condemnation records were scanned to preserve them in perpetuity, but also to bring the digital records online to make them accessible anywhere in the world. The records of the sacrifice that thousands of people made in order to make the Park a reality will now be available for many generations of students, descendants, historians, and the general public to use and learn from.”

We are providing professional experience for students and a service to the community.

From Kevin Hegg: “ERP is important on so many levels. History students working on the project learn everything from basic archival practice to scanning fragile documents to building a digital archive. These skills are valuable as graduating students seek employment. And, it brings thousands of legal documents that tell the rich history of our local community out from the recesses of the courthouse onto the Internet. This is an extensive and growing resource that will provide primary sources for scholars and genealogists for decades to come.”

Indigenous nations in the area

These displaced families were only the most recent people to live in the area. Since time immemorial, this area has been home to people in Indigenous Siouan, Algonquian, and Iroquoian communities. The Monacan Indian Nation, a federally recognized sovereign tribe with thousands of members, is based on Bear Mountain in Amherst County, near the lands that are now Shenandoah National Park.

Historical context for Indigenous nations in the area:

Exploring Rockingham’s Past: See the digital records now publicly available through this project. These include the legal documents in the Shenandoah National Park (searchable by surname), documents from the Prohibition, documentation of enslaved workers, and more.

Piedmont Environmental Council (PEC): an article by Kristie Kendall, PEC’s Historic Preservation Coordinator, offers additional context and information about the Rappahannock arm of the project. PEC has been actively involved in working with the descendant communities since 2012, through a program called “Celebrating Mountain Heritage.”