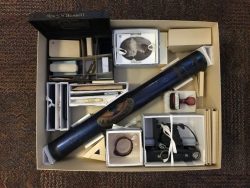 Three dimensional objects in the Blackley Collection were processed in Preservation for long term storage this Summer. Among these objects are: an early Brownie camera, a hand-colored milk glass plate photograph, a ruby glass souvenir creamer from the 1893 World’s Fair, and a metal documents canister c.1890. Creating custom mounts for the artifacts helps extend their lives and keeps them from damaging each other in storage. Objects must be separated from their neighbors not only to prevent abrasion and breakage but also to minimize the chemical reactions that speed up decay. Materials age at different rates, and any losses such as flaking paint or rust from corrosion are contained within each custom box or folder.

A variety of archival materials were used to create the mounts. The boxes were constructed with blue corrugated E-flute board and lined with Volara, an inert plastic foam, when extra cushioning was required. Unbleached cotton muslin cloth was used to create “hammocks” for supports, and cotton twill tape was used for tabs and tie downs. PH neutral cardstock was used to create four flap folders on some of the sturdier objects. 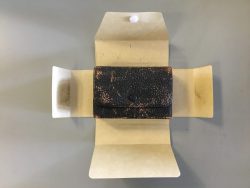 One of the most complicated mounts holds two small gilt wooden picture frames in poor condition and a glass plate photograph. 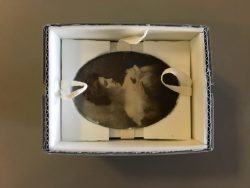 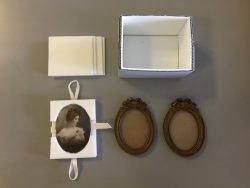 All three objects fit into an open-top box padded on all sides with Volara. The two frames rest at the bottom, cushioned by layers of Volara while the glass plate photo rests above them in a fitted Volara seat on a blue board base. The section of the box that holds the glass plate photo is designed to be removable with cotton twill tape tabs. Another twill tape tab gently lifts the plate from its fitted housing. 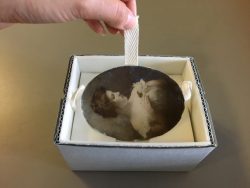 Building storage mounts is a bit like crafting 3D puzzles. Individual objects need to be secure, but space is at a premium. In this case, the challenge was for all the 3D objects to fit within one large Hollinger artifact box. Dr. C.C. Phillips’ documents tube would only fit diagonally in the tray, dividing the remaining space into two awkward triangles. We conserved space by housing objects together and using one object, a metal lock box, to house many small artifacts, each protectively wrapped and separated by dividers. 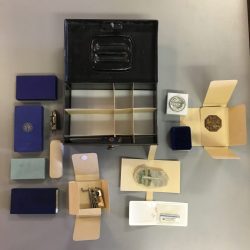 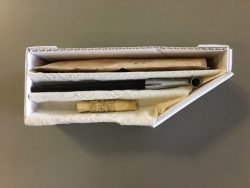