“If you’re not part of the solution, Then you’re part of the problem,” read the tagline at the top of the paper.  Next to it, a large, hand drawn peace sign proclaimed the name of the paper – The Fixer. It began that day with a strong purpose – to re-establish the lines of communication between students, faculty, and the administration of Madison College President G. Tyler Miller.
“The lines of communication at Madison have been cut, if they ever existed, and the sole purpose of this paper is to reopen these needed channels of dialogue, not only between student and administration, but also between student and student, between student and the faculty, and within the faculty itself.”
Jay Garland Rainey was appointed as first editor of The Fixer, but students, faculty, staff, and community members of all points of view were regularly encouraged to write submissions for the paper.

The Fixer was published during turbulent times by an increasingly coeducational wave of students.  The content includes feature articles and op-ed pieces, poetry, prose, hand drawn cartoons and advertisements.

“We do not want readers to accept our word as being above question.  We are striving for a meaningful exchange of ideas, a confrontation of minds.  If we fail in our objective, it is not because of what we say, but how it is received.”

During its publication, The Fixer covered a diverse range of stories, including the Nixon administration, the Vietnam War, race relations, increasing rules for student conduct, and general protests. 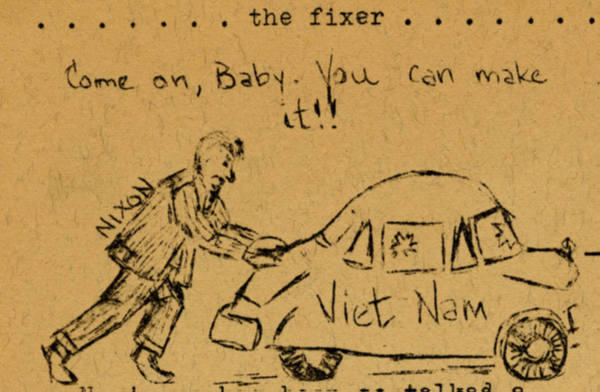 Often discussed were student rules of conduct, which leaned heavily on the legal principle of in loco parentis, or in the place of a parent, which allowed the university to make rules concerning academic conduct with a more parental focus.

“Madison carries the principle of in loco parentis to a point which I view as extreme, degrading, stifling of significant student growth and initiative, and contemptuous of the ability of students to determine almost any part of their direction and destiny,” wrote James D. Black, an Instructor of Psychology, in a letter of resignation submitted to The Fixer.

Also discussed were the protests occurring both around the nation and in their own backyard.

Prominent protests at the school during that time included the “Madison 30 protests”, in which several members of the college were arrested following a sit-in demonstration at Wilson Hall.

This, along with other similar demonstrations, saw the end of several student and faculty careers at the university as a result.

Wrote one protester, “As I write this, I am a Madison College student; when it is published, I may not be.” 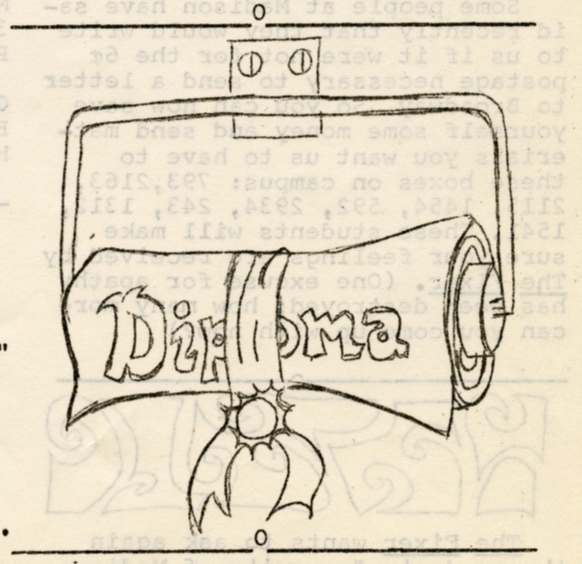 Stories often criticized both the Miller and the Carrier administrations.

“‘Veto’ in Greek means Miller,” read one caption, underneath a photo of the Declaration of Independence with a large ‘Veto’ across the front.

According to a handful of stories, the publication nearly ran out of funding on several occasions.

“We’re too poor even to have moths…” ran one headline on the subject.

Contributions at the time could be sent to a P.O. Box in Broadway for Madison College Press (Free).  Daily needs included the cost of paper and the purchase of a mimeograph machine.  Readers were encouraged to pass the paper to others as a limited number of issues were printed.

In all, the publication ran from 1969-1973, roughly the same span of time as an average student’s career at the university.

For those looking to research issues during that time period in the Valley’s history, or just wanting to check out the excellent hand drawn artwork, existing copies of The Fixer can be found online on JMU Scholarly Commons.  In 2015, Digital Collections digitized 73 issues of The Fixer from the collections within the Special Collections unit in Carrier Library.  Over 500 pages were scanned, edited, and digitally compressed into PDF files for online use, in a process taking over 60 hours to complete.

Each issue of The Fixer is keyword searchable to aid researchers in finding specific content. These PDF files may be viewed online or downloaded from the JMU Scholarly Commons website,http://commons.lib.jmu.edu/fixer/.