A horse with no name

America’s folk rock hit “A Horse with No Name” became the background music as I made my way through processing a newly acquired archive of Henkel Family papers. Rarely would I apply a music soundtrack to archival arrangement, but in this case it seemed fitting.

In a letter dated July 1, 1860, W. J. Crockett of Mount Jackson, Virginia wrote to Siram Henkel (1809-1879) that he desired to know the names of the horses Henkel had recently sold to Samuel Crockett. “Horses,” wrote Crockett, “will not drive so well with out knowing their names.” 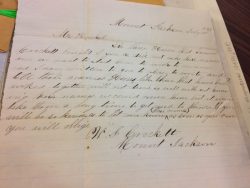 Sir those Horses that Samuel Crockett bought of you he did not ask their names and we want to start them to work tomorrow and I have written to you to please to write and tell their names. Horses like those that have been worked together will not drive so well with out known their names. We could name them but it would take them a long time to get used to them. If you will be so kind as to let me know their names a soon as you can you will oblige