Feature Friday: Storytelling Through Clothing – A History of Women’s Rights at JMU

Perhaps you have noticed a beautiful display of vintage women’s clothing in the lobby just inside the historic entrance of Carrier Library, near the life-size statue of Joan of Arc. 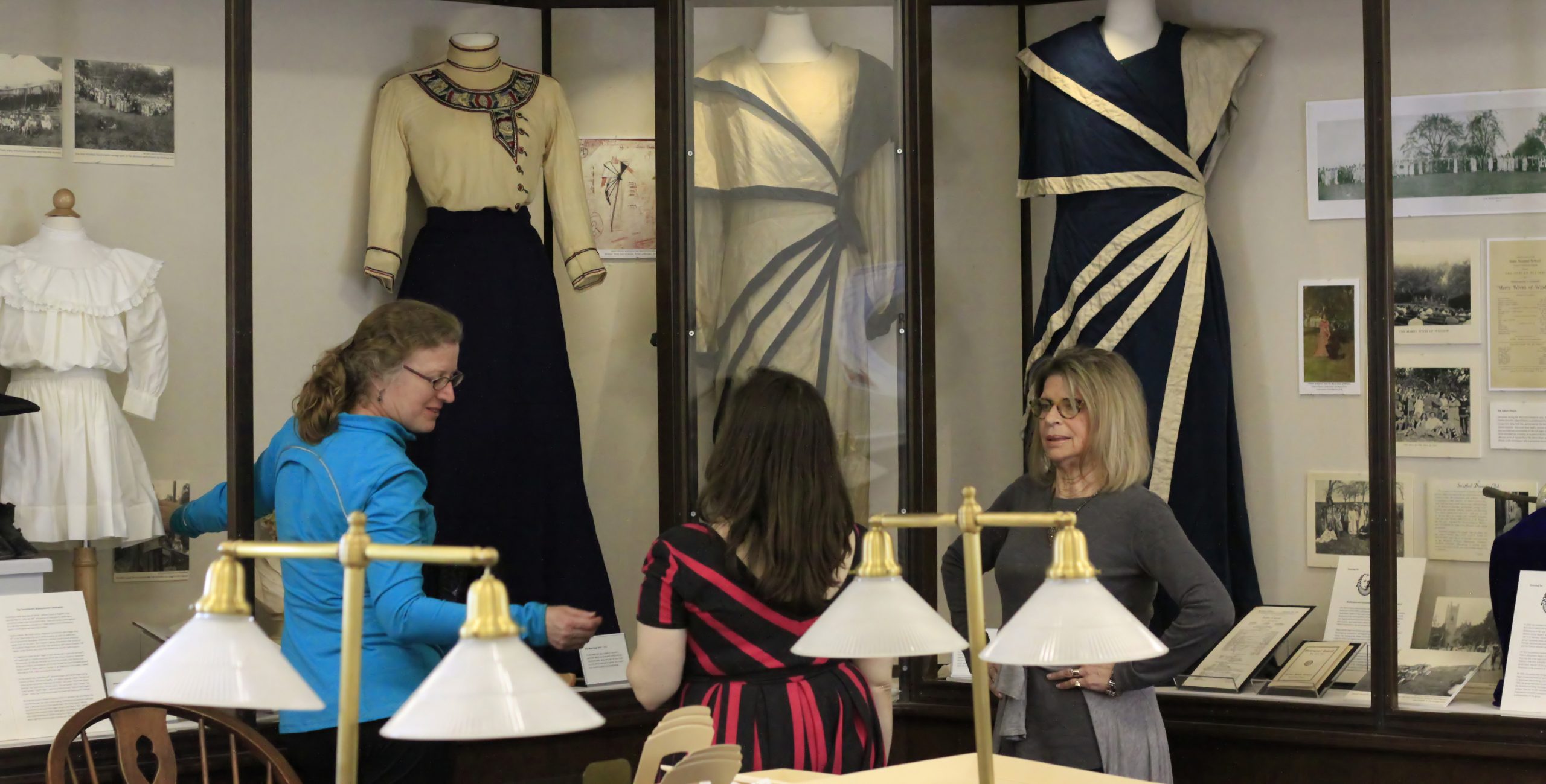 The historic clothing exhibit celebrates the 100th anniversary of the 19th Amendment being ratified, an event which gave many women in the U.S. the right to vote. The exhibit also offers a window into the student experience on our campus at the height of the women’s suffrage movement, when James Madison University was the State Normal School for Women at Harrisonburg, only 12 years into its existence.

The “19th Amendment at JMU” exhibit will be on display until April 9, 2021. This is the 6th in a series of exhibits of storytelling through women’s clothing by Pamela Johnson (a JMU professor in Theatre and Dance) and Julia Merkel (Preservation Officer for JMU Libraries Special Collections) since 2008. It will be their last collaborative exhibit before Johnson’s retirement in Summer 2021.

How it all started

In 2008, Pamela Johnson had already dedicated many years of work into building the collection of thousands of items of historic clothing in JMU’s School of Theatre and Dance. The costume shop held hundreds of items, but the rest of the collection of historic clothing from the 1830s to the 1970s was tucked away in carefully labeled boxes and totes in the Forbes Center. She wanted others to have the chance to enjoy them, but there wasn’t any secure, museum-quality exhibit space.

Out of the blue, Johnson received a call from Julia Merkel, a friend from graduate school working in JMU Libraries, to ask if she could provide clothing for the 2008 centennial celebration for JMU.

What followed was a 13-year collaboration and a series of 6 exhibits that told JMU stories through clothing from the historic collection in Theatre and Dance and items from Special Collections. The most recent of these exhibits celebrates the 100th anniversary of the 19th Amendment being ratified.

Johnson and Merkel made fascinating connections with JMU’s past while researching for the exhibits, some of which made it into the website created with the digital projects team in JMU Libraries: 19th Amendment: A History of Women’s Rights at JMU.

Q: What did you discover about the women on campus during the women’s suffrage movement through research for the 19th Amendment at JMU exhibit?

Merkel: One of the stories that I like to tell myself is that there were some subversive or rebellious faculty members in the early years who might have been responsible for choosing purple and gold as the school colors – coincidentally, those are the suffragette colors. Even though the official story is that they took the gold from the Lee Society and the purple from the Lanier Society, I really want to think that there were suffragettes that maybe had to keep a low profile back then but signaled their support with the colors.

Johnson: The women here were very present in the conversation. They were not cloistered in the way that many people think that women’s colleges were. And that I think is kind of confirming and exciting.

Q: What interesting stories have you uncovered while researching for these exhibits? 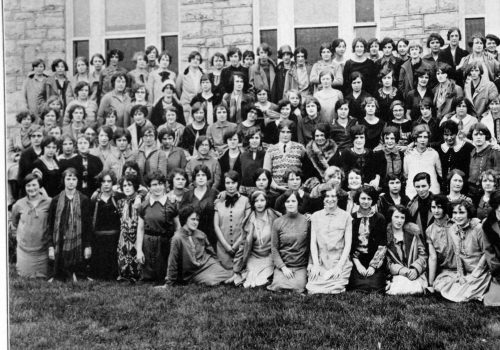 Pictured: The 1926 freshman class photo shows a variety of hairstyles. Students were inspired by Dean Bernice Varner to bob their hair, despite regulations against the hairstyle.

Johnson: Varner, the Dean of Women, went to New York to a conference, and when she came back, she had bobbed hair, which President Duke, by whatever method, had forbidden. He had such respect for her that the students took permission to do it, too. I can’t remember the source of the anecdote, but it was said that the trash cans between the formerly named Jackson Hall and what would have been Harrison were filled with hair, because the students cut their hair in a bob.

Johnson: Apparently President Duke had forbidden students to ride with the aviators coming out of the local airports in their biplanes. He was on his little private golf course when a biplane “buzzed” him – it was his Dean of Students, Miss Varner! She was a real force of nature. President Duke respected her, and also she was a force that the students were happy to march behind.

Q: I would love to hear more about the Joan of Arc statue at the entrance of Carrier Library.

Merkel: The one we have was a parting gift from President Julian Burruss and his wife Rachel to the students when they were leaving. We’re one of four women’s teachers colleges in the state, and I think all of them have a copy. So, we’ve never been able to find out exactly if it was coincidental, but having a symbol for the suffragette movement around the same time was providential for women pursuing their education when that was not the norm. 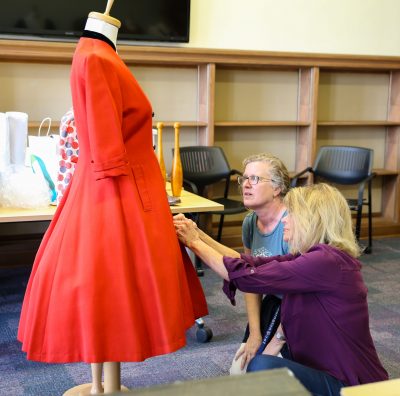 Pictured: Julia and Pam preparing a dress from the historic clothing collection for an exhibit.

Q: This was your 6th collaborative exhibit. What were the others about?

Q: What is your process like for creating these exhibits?

Merkel: There’s like a year of research that goes into each of these. The glass walls in my office are kind of like a big giant whiteboard when we’re planning these out. We’ll do trips to Pam’s storage area and new sketches of different pieces and try and map out the story and we’ve got sticky notes just all over the place. You’re trying to design for a 3d space on a 2d surface. We would sip tea and brainstorm what pieces could tell the stories between Special Collections, the historic clothing collection, and even our personal collections – an antique sewing machine and typewriter come to mind.

Johnson: Julia and I would agonize over which things we had to cut because we didn’t have enough space. Oh, how many times did we wish for more square footage!

Q: Where did funding come from?

Merkel : Pam got a Burruss grant – there used to be little research grants in Special Collections for faculty to come and pinpoint an area of campus history that was important. Funding for the exhibits themselves was absorbed into department budgets.

Q: Why is this kind of exhibit so important?

Johnson: Material culture seems to be on the extinction list in this digital age. This kind of exhibit is an opportunity for people to experience material culture directly, and even more so to recognize the value of it.

Merkel: You may not be aware, but the history of fashion is so tied to our material culture. Thinking back to the exhibit we did on World War II, you know, the change in fabric from silk to rayon and the styles that moved through the 50s with these high fins and flares and hemlines changing – there’s so much connected and such a rich, rich treasure trove for telling a story. And some of the garments actually come from local families. So there’s this other level of connection to the community. 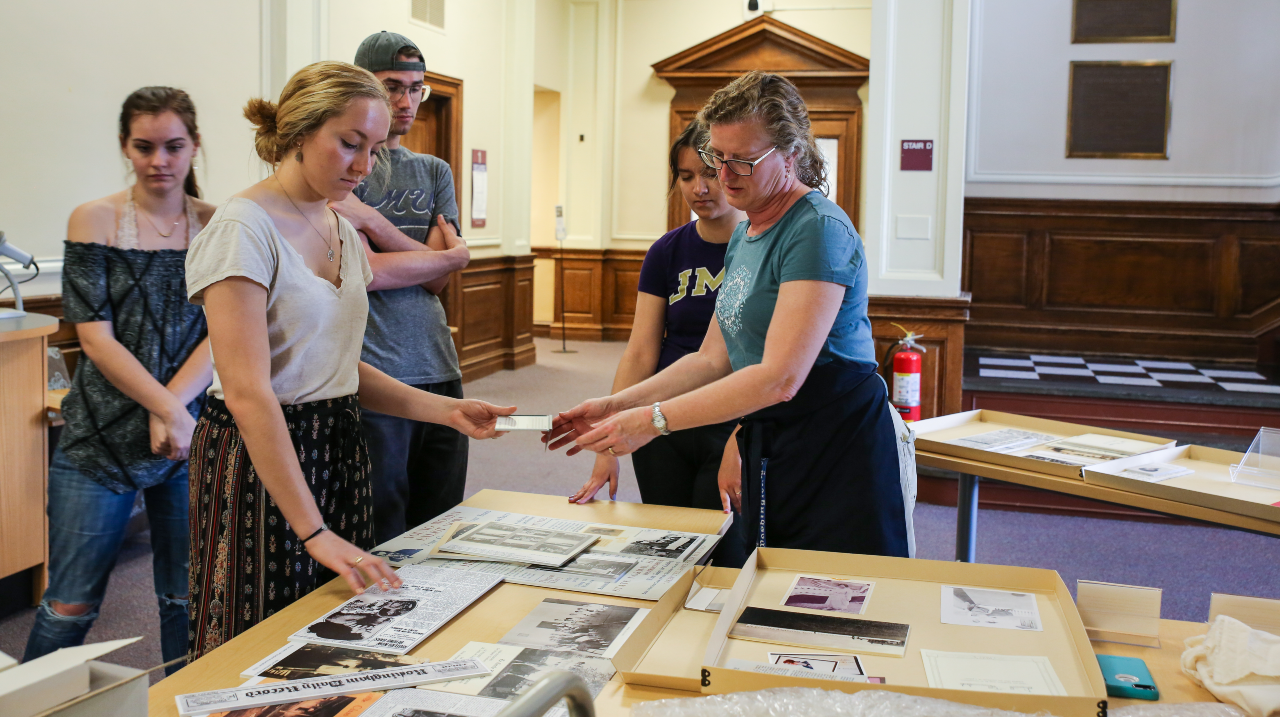 Q: How has this exhibit provided an educational experience for the students you work with?

Johnson: As educators, Julia and I have always included, and frankly, rely very much on the work of students. Inviting them to participate in the installation has been really really satisfying.

Merkel: This is such a hands on process. Involving students over the years in actually participating in the curation and the whole process has really given me things to talk about when writing recommendation letters for graduate school applications or for job placements. I’ve had several students over the years go on to careers in museum and library fields.

Q: How can we keep creating deep learning experiences like this one?

Johnson: All of this richness came out of a collaboration – that’s something that I think needs to be explored. Julia and I have sat holding hands and weeping about the richness of this. Efforts need to be made to reach out and find these synapses between people in different divisions. That’s what higher education should be doing – nurturing and creating resources for those discoveries. It’s so exciting. I mean, it’s like going down a hole with a torch and finding something that you never believed was underground. That’s something that I will just treasure so much in my experience here. 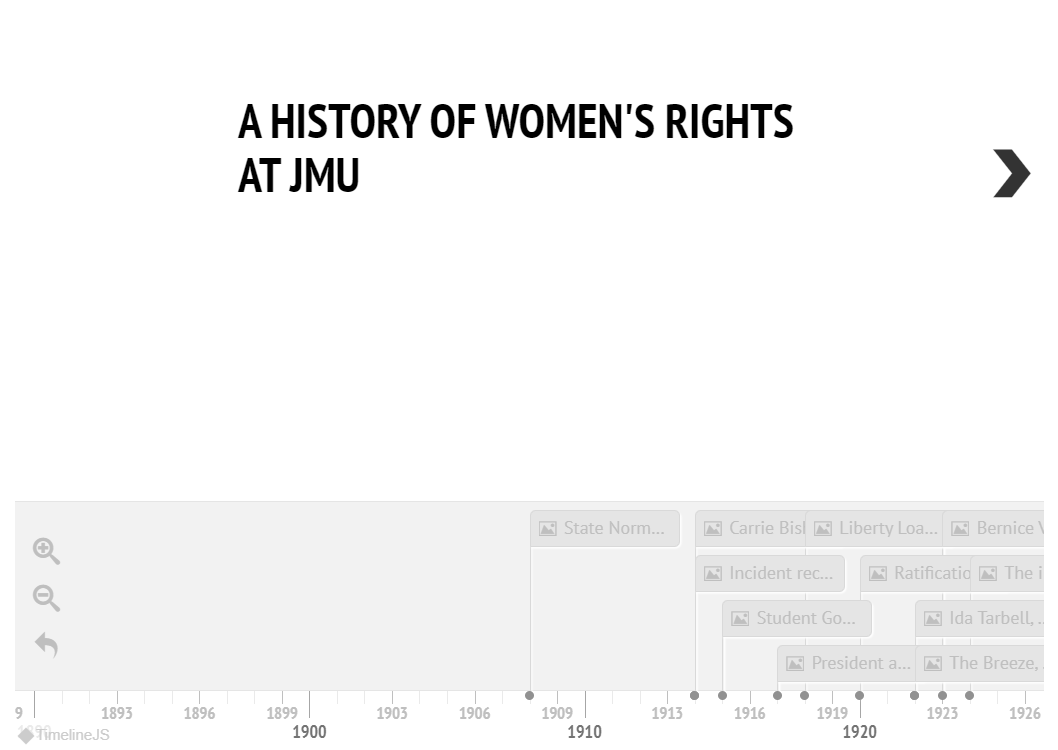 Pictured: The Women’s Rights at JMU timeline from the virtual exhibit.

Although the physical exhibit is coming down April 9, 2021, you can still visit the virtual exhibit: The 19th Amendment: A History of Women’s Rights at JMU. The site includes an interactive timeline of women’s rights at JMU, photos of early students, yearbook snapshots, and more.

A related exhibit is also on display on the second floor of Carrier Library. JMU senior Ranessa Rabenda took the lead on creating the partnering exhibit, titled Women and Their Worth: Equality on Campus. “This exhibit helped me to gain professional experience as a curator and exhibition designer. I felt that I was making an educational impact on the JMU community and with this exhibit I could change someone’s life.” The end date for this second exhibit has not been announced.

To support more projects like this, make a gift to the Special Collections fund in JMU Libraries. For more Feature Friday stories from JMU Libraries, visit our website or search #JMUFeatureFriday on Twitter.