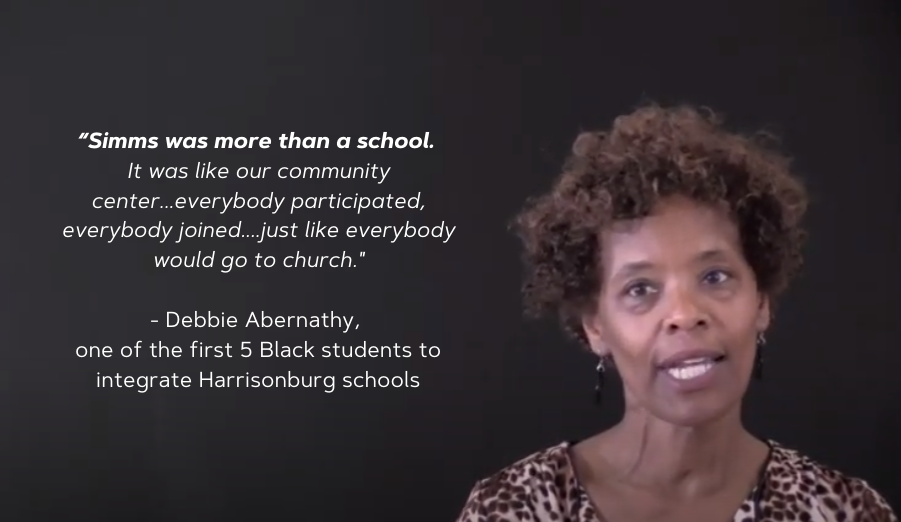 Pictured: Debbie Abernathy, participating in an oral history interview conducted by JMU students as part of the Celebrating Simms project. 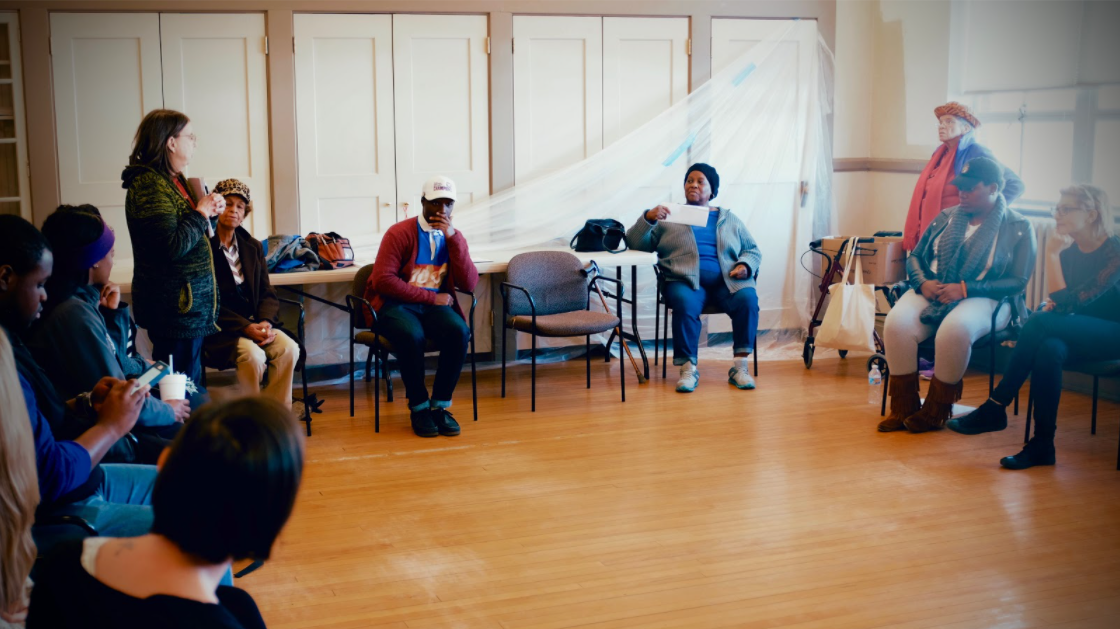 Pictured: JMU students meet members of the Simms Advisory Board and the Shenandoah Valley Black Heritage Project for the first time, January 2016; photo by Seán McCarthy.

The project began in response to community interest in preserving the story of the school and transforming the building itself into a celebration of that history. Robin Lyttle of the Shenandoah Valley Black Heritage Project describes how the community worked with JMU students to move the project forward: “It started as a project that was going to be set up as a temporary exhibit. It was the community that asked to have the permanent installation at the Simms School. It was the community that made sure the story was being told honestly.” There were some prior efforts to tell pieces of this story, including those by Billo Harper, Doris Harper Allen, Ruth Toliver, Dale MacAllister, Robin Lyttle, and others–but few physical records remained because of a building fire. The only records of the school that remained were a few newspaper clippings and legal documents, private photographs, a few oral histories, and a lot of memories.

In 2016, JMU students in the “Representing Black Harrisonburg” class partnered with over 56 collaborators, including Billo Harper, Robin Lyttle, and other local community-based historians, former Simms students, and numerous local institutions, to recover and preserve the school’s history and its importance to the community. Mollie Godfrey, one of the faculty who spearheaded the project, describes how the students worked to rebuild the school’s lost history: “The only place where any of these stories or photographs existed was in people’s homes, so former students of the school worked with our students to bring together an archive to tell stories and reconstruct both the historical background and the story of the school and its community. We returned the images to the people who owned them, but we now have a digital archive of them.” At the exhibit opening, several former students of Lucy F. Simms school also shared their memories in brief video interviews that are included on the Celebrating Simms website. 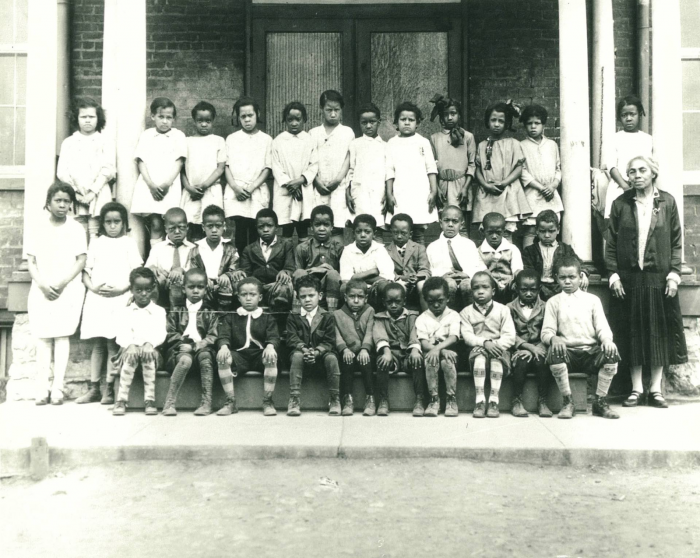 Pictured: Lucy Simms with her class in 1906.

The project also helped to memorialize Lucy F. Simms, a renowned teacher from Harrisonburg who was born into slavery and pursued a degree in teaching after her emancipation. In her 57-year career, Simms taught over 1,800 students and only missed half a day of work for illness. She was loved by her students and became a prominent figure in the community. Several years after her death in 1934, the new public school for Black children in Harrisonburg was named in her honor. 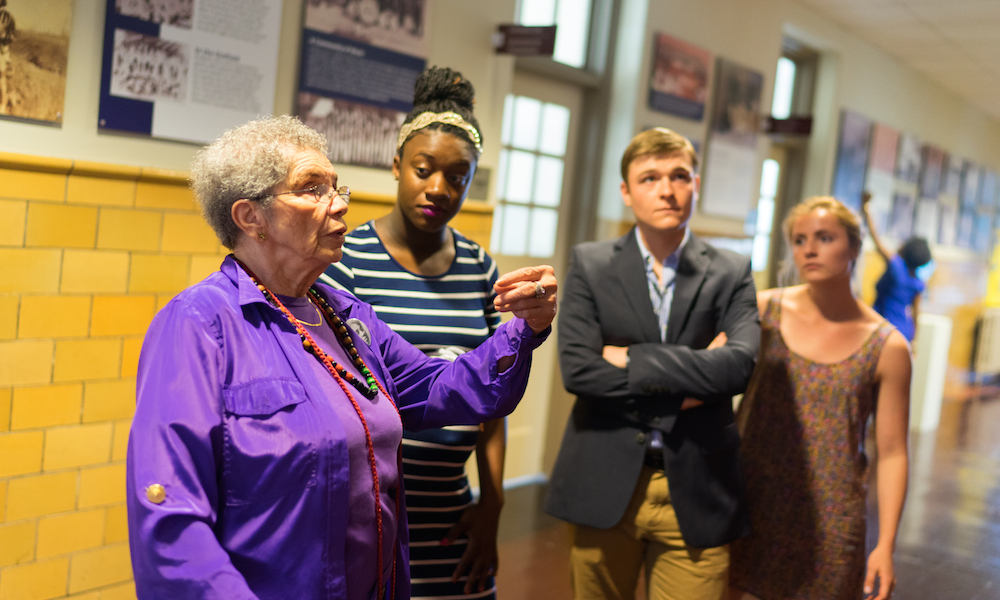 Pictured: Doris Harper Allen, one of Simms’ former students, with JMU students Deana Forbes, Brett Seekford and Hannah Jones at the opening of the exhibit in April, 2016; photo by Mike Miriello.

This month, Harrisonburg High School will install a permanent Lucy Simms exhibit in its atrium entrance.

The Celebrating Simms project is a step toward a more inclusive history. JMU professor Seán McCarthy, who has worked alongside Mollie Godfrey in leading the Celebrating Simms project, points out that history often does not reflect the diversity of the people living in a place: “It’s important for students to understand the place where they live. With over 50 languages spoken in Harrisonburg City Schools, this is truly a cosmopolitan area. Our history and physical spaces should reflect that.” 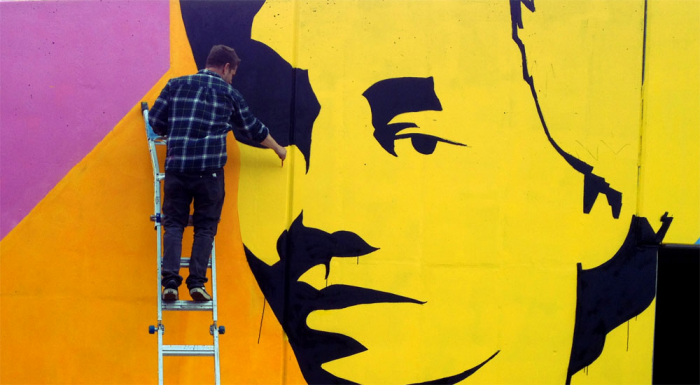 He emphasizes that the Celebrating Simms project is not just about making sure that our local history is representative of everyone, but also how history can be recorded and shared by anyone: “So often, history is written by those with funds. This kind of exhibit is often created by museums, but we don’t have a lot of those in Harrisonburg. People in rural areas should know that they can be part of collecting and telling their own stories. That’s what this project is about–showing local high school students that they can be part of creating their own history. Seeing the Lucy Simms exhibit in a prominent place in school is a demonstration that history can be written by anyone. It’s an invitation to participate in writing your own history.”

JMU Libraries supported the project with expertise in digital projects, archiving, and metadata. Godfrey and McCarthy reached out to the Libraries for help with the project when it became clear that a digital archive would be needed. Godfrey has worked with the Libraries on many projects in the past: “I do a bunch of project-based classes, which almost always intersect with Libraries in one way or another.” The Libraries built the website that is now the home for the Celebrating Simms collection. Godfrey describes how Libraries staff are now helping to add metadata, or tags, to the photos in the archive to make them searchable across the globe: “This year we have a graduate student and community partners Ruth Toliver and Robyn Lyttle working with Steven Holloway, Kevin Hegg, and Kirsten Mlodynia from the Libraries to create better metadata for all of those images so that we can have a really functional digital archive.”

Libraries have an important role in society, and it’s evolving. McCarthy describes how libraries support learning in a variety of ways: “It’s important for people to know that the role of libraries is multifaceted. People often associate the library with the stacks, but it’s also a network of expertise…it’s the center of inquiry, of pedagogy, of research at a university. It’s the center of learning.”

Supporting projects like Celebrating Simms is an important part of our mission. We believe in dedicating our resources and expertise to support projects of value to the community. JMU’s mission also emphasizes community engagement and engaged learning. It is our honor to be invited to contribute to the Celebrating Simms project and work alongside community members, faculty, and students in recognizing Lucy F. Simms and the school named in her honor. 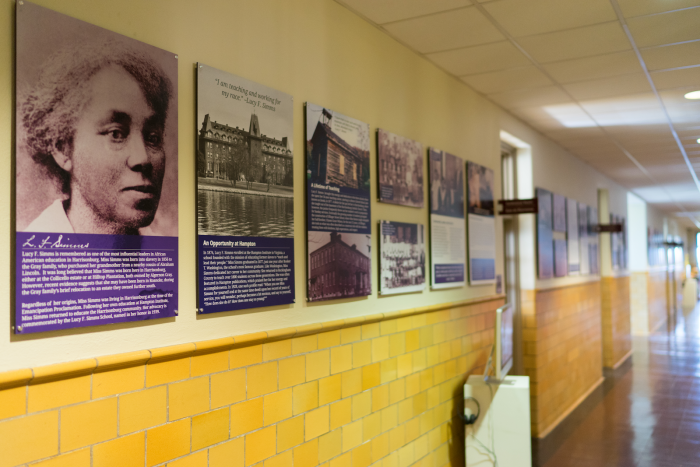