Keeping Up-to-Date with an Age-Old-Art 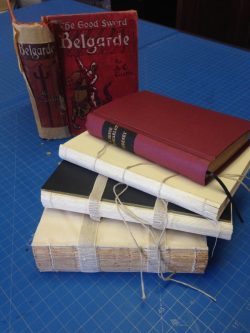 The time to hone “bench” skills, learn new repair techniques, and catch up with colleagues in the book arts is always a welcome opportunity. This Summer, I was able to attend three workshops at the Cat Tail Run Bindery. Incidentally, the school and bindery are run by proprietor Jill Deiss, a JMU graduate. The bindery opened in 1991, and the School for Bookbinding Arts followed soon after as an alternative to traditional apprenticeships. Deiss believes that bookbinding can be effectively taught through short, focused courses within a carefully designed curriculum (perfect for working professionals.) She has seen her students develop advanced skills with many going on to full conservation training.

Cat Tail Run is a busy and magical little place tucked away in the wooded rolling hills northwest of Winchester, Virginia. Customers of the bindery are as varied as private citizens wishing to have family bibles restored or new theses and dissertations bound to oversize county record books built to withstand extremely heavy use to prestigious institutions such as the Folger Shakespeare Library, the National Cathedral, or the Smithsonian requiring period appropriate leather and gilt-tooled re-binds for their rare tomes. Students are as varied as book collectors looking to acquire skills to spiff up their own collections to professional library staff to young professionals seeking to gain traction for their vocation. According to Deiss, classes fill up quickly and steady streams of customers bring in work for new binding and restoration of old bindings–a good indication that the traditional craft of hand bookbinding is far from obsolete.

The three classes I was able to attend this Summer were: “New Cloth Bindings”, “Introduction to Book Restoration,” and “Book Sewing Intensive.” The first two are part of the Core Curriculum, while the last is in the Special Topics series. At this point, I have only one more core course (Advanced Leather Binding Restoration) before being eligible for the Master Series classes!

“New Cloth Bindings” was led by two instructors, Jill Deiss and Dee Evetts. In this class, we were introduced to rounded-spine, signature-sewn bindings and text preparation for titling. We prepped our specimens and selected appropriate book cloths and binder’s boards, and created gilt titling labels. On Day 2, we created covers, learned how to “hang into the spine,” glued hinges into rounded spine bindings, applied appropriate endsheets, and glued on the finished title labels. Evetts also demonstrated binding stacks of loose papers (i.e. hard binding for thesis and dissertations) via drill and sewing flaps into flat spine boards while Deiss demonstrated binding with flexible covers. It was especially helpful to learn robust attachment techniques and hear in-depth background on traditional craft. 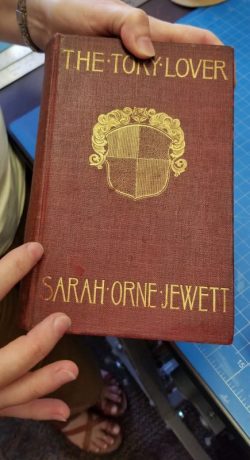 “After” shows this case clean, toned, and finished with a light sealant

“Introduction to Book Restoration” was led by Jill Deiss and Anna Barnes and began with a brief history of 19th century case binding features such as machine assisted loose hollows and French joint hinges as compared to earlier bindings which were entirely hand bound. The differences and uses for paste vs. glue were covered as were tightening of inner hinges, corner repair, split joints, endcaps and gold tooling. Endsheet replacement and case reattachment were demonstrated. The next day toning and discoloration of cloth and leather bindings, leather consolidation, and repairs modified for leather repair including wax and water based colorants vs. oil and color theory were covered. 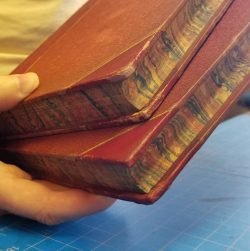 Worn leather corners shown at 2 stages of repair: top with just the Japanese paper fill and bottom toned and waxed

“Book Sewing Intensive” was led by Susan McCabe and Jill Deiss. McCabe began by showing us how to pull a text from a cover, apply waste sheets, soak and remove old linings, and pull and press signatures. We learned to punch signatures with jigs and set up sewing frames with “H” and “A” keys and various techniques such as French lap stitching and all-along stitching. Deiss led a demonstration of single sheet construction, and then showed us notching for sunken cord bindings. The second day began with demonstrations of spilt thong, double-raised cord, and single raised cord binding. We removed text signatures from the press, re-collated, and applied hinging. Sewing frames were set up with a two-on technique. Paste was applied to each of the three spines in preparation for rounding and backing textblocks. An overview of linings, endbands, and tubing was helpful as were whip stitching, overcasting, and hogbacking techniques.

The handouts from each of the workshops included detailed directions, supply sources, swatches and comprehensive bibliographies for further study. We’ve had several multi-signature pieces come in from the Music Library, and split texts are very common in the general collection, so I anticipate immediate use for many of these techniques. While some repairs were familiar variations of techniques already in my “toolkit” most were new and will invite more experimentation and possibility here in the preservation studio. 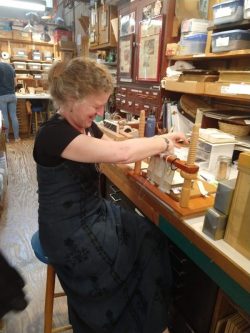 Julia mastering the French lap on a sewing frame