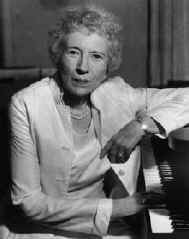 Gena Branscombe, American woman composer, conductor and writer, was born in Picton, Ontario in 1881 and died in New York City in 1977.  As a child she exhibited great musical talent on the piano. Upon graduating from Picton High School at the age of 15, she entered the Chicago Musical College.  While there she studied composition with Felix Borowski and was awarded the Gold Medal for Excellence in Composition in both her graduate and post-graduate years.  She studied piano with Arthur Friedheim, Hans von Schiller, and Rudolph Ganz.  She spent four years as a faculty member of her Alma Mater, and then accepted a position as the director of the piano department at Whitman College in Washington.  She traveled Europe, which included a year’s work in composition with Engelbert Humperdinck in Berlin.  Upon returning to America she married John Ferguson Tenney of New York, and lived in New York City where she continued her musical activities.

Ms. Branscombe received many honors and awards including the annual prize by the League of American Pen Women for finest work produced by a woman in 1928, and an honorary M.A. from Whitman College in 1932.  She was awarded honorary member of the Associated Musicians of Greater New York.  She also held distinguished positions as President of the American Society of Women Composers from 1929-1932, Chairman of American Music, New York State Federation of Music Clubs from 1930-1935, and Vice-president of the National Association of American Composers and Conductors in the 1930s.

In order to preserve the collection each item is bound in an acid free folder and placed in a climate controlled room within the Music Library.  Compositions are grouped by published versus unpublished works, then by genre, and were assigned a call number.

The collection is not available for lending.  However, unless the item is available for purchase or rent, the Music Library has been given permission to make photocopies, upon request, for educational use.  Please use the request form to request Music Library make a copy under the following conditions:

For questions or comments about the collection or this site, please contact  the Music Libarian at (540) 568-6978 or email at briancckbrn@jmu.edu.