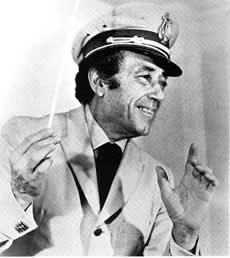 Paul Lavalle was born on September 6, 1908 in Beacon, New York and died in Harrisonburg, Virginia on June 24, 1997.  He studied music at Juilliard School of Music and was a student of Joseph Schillinger. He is remembered as a composer, conductor, arranger, production director, and instrumentalist performer on clarinet and saxophone, but his ambitions were mainly geared towards conducting. Paul Lavalle was a member of the NBC Symphony Orchestra, which performed his first composition for symphony under the direction of Leopold Stokowski.  Lavalle created and organized several radio programs including the Band of America radio program, which was the first musical organization of its kind to appear on coast-to-coast television.  In 1964 The Band of America began touring extensively and that same year it was appointed the official band of the New York World’s Fair for two years.  Paul Lavalle served as guest conductor for many orchestras including the New York Philharmonic Symphony, the NBC Symphony, the CBS Symphony, the ABC Symphony, and the Rochester Philharmonic Orchestra.  In 1968, after making two guest appearances at Radio City Music Hall, Paul Lavalle was appointed Director of Music and Principal Conductor of the Radio City Music Hall Orchestra where he remained for seven years. He attended regional music festivals and clinics where he conducted massed bands of high school students in concerts and parades and gave lectures for both students and Band Directors.  His interest in combining youth with music led to the formation of the All-American High School Band, which continues to perform at many events throughout the nation including the Macy’s Thanksgiving Day Parade and the Tournament of Roses.   By honorary invitation of the Dutch Government, Paul Lavalle was the annual Festivalmeister of the Tulip Time Festival held at Katwijk aan Zee, Holland.  For his work with the youth he was presented with the “Christopher Award”, the “Man and Boy Award”, and the “Rollie Statue” for participation in the Macy’s Thanksgiving Day Parade.

In order to preserve the collection each item was bound in an acid-free folder and placed in a climate-controlled room within the Music Library.  Compositions are grouped by published versus unpublished works, then by genre.  To view the inventory list click here.  The collection is not available for lending; however, unless the item is available for purchase or rent, the Music Library has been given permission to make photocopies, upon request, for use by library patrons.   Please consult this list of sources for items not in our collection and to determine the availability of items for rent and/or purchase.

To request a photocopy or for questions or comments, please contact the music library at (540) 568-3542 or at library-music@jmu.edu  Please include your shipping address as well as a phone number and/or an e-mail address.