Special Collections Graduate Student Assistant, Yoon Ji Kim, has recently completed processing The Bradley and Brian Flota Comic Book Collection. A portion of the comic books were donated in 2015 by Dr. Brian Flota, Humanities Librarian at James Madison University, and became the Brian Flota Comic Book Collection. In 2016, Flota donated a collection of over 7,000 comics owned by his father, Bradley Flota, expanding the original collection to over 9,700 comic books. This collection contains a wide selection of comic book and magazine genres from major publishers such as Marvel Comics, DC Comics, and Dark Horse Comics, as well as independent publishers. Thanks to Kim’s efforts, the comic books are fully inventoried, housed individually in acid-free paper folders, and available to the public.

Can you describe the process of working with these comics? What was the condition of the comic books when you started the project, and what did you do to get them into their final state?

The process was a long one as it took a good amount of the year. Most of the comics were in good condition but many were inside sticky plastic bags. By removing the comic books from the plastic bags and putting them into individual acid-free folders, we were actually able to save more space. Occasionally, I found edibles such as candy or drink mix and a bug or two (no, not edible bugs).

In their current condition, it is hopefully much easier for researchers to find specific volumes and editions of the comic books since the acid-free folders are tabbed and each are handwritten out per issue. 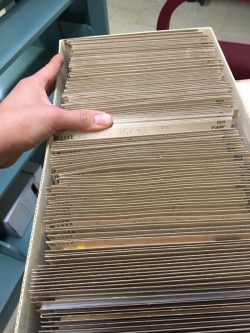 A look inside one of the boxes of fully processed comic books.

What were some of the challenges of processing such a large collection (9,000+ issues) of comics?
I remember bearing witness to the first comic book being taken out of its original plastic bag. Just heartbreaking. That was perhaps the most challenging aspect of processing this collection. 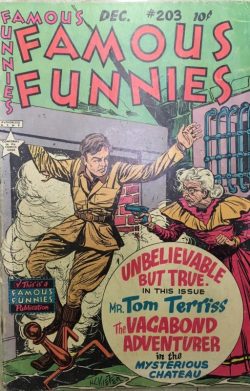 Did your process change at all as you went along?
Only for efficiency. When I started processing this collection I wasn’t able to get through as many issues. At one point we had to order a few thousand folders when we ran out. During this time I was advised to sort the comic books in order so that no time will be lost when the folders arrive.

Did you start to have a favorite writer or illustrator?
Not really. But I did notice that the graphics style would change over the decades. Many of these comics are classics but the writers fall under the category of their publishers and notably the characters.

If you could be superhero who would you be?
DC Comic’s The Question. Absolutely fashionable. 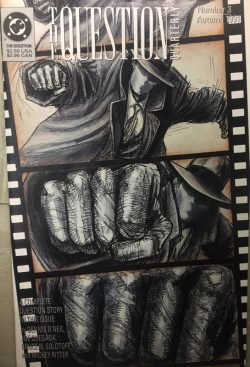 Any final comments about the collection or the process?
I enjoyed processing these comic books. There are of course many issues in the collection that are not mainstream but I hope with the recent surge of Marvel/DC movies and TV shows being released, this comic book collection will receive more attention. Many of the comic book issues have more detail and reveal character(s) (both major and minor) and their relationship ties than the ones seen more regularly on screen. 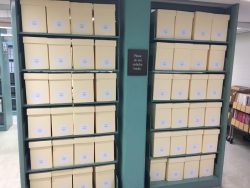 The finding aid, which includes a full inventory of all the comic books in the Bradley and Brian Flota Comic Book Collection, can be found here: https://aspace.lib.jmu.edu/repositories/4/resources/212. The comic books are available for view in the Special Collections Reading Room, on the second floor of Carrier Library, Room 203b.