The 19th Amendment: A History of Women’s Rights at JMU

JMU Libraries is pleased to present the sixth Dressing for Education exhibit collaboration between Special Collections and the JMU Historic Clothing Collection. This exhibit celebrates the upcoming 100th anniversary of the 19th amendment’s ratification and explores the civic engagement of women on campus through artifacts, manuscripts, and clothing. The 19th Amendment: A History of Women’s Rights at JMU is free and open to the public during all library hours in the historic west wing of Carrier Library now through Spring 2020. This exhibit was curated by Julia Merkel ‘92M and Pamela Schuelke Johnson ‘90M with the assistance of Madison Whitesell ‘17, Ashley Roth ‘17, Fiona Wirth ‘18, Matthew Perkins ‘18, and Renessa Rabenda ‘21. 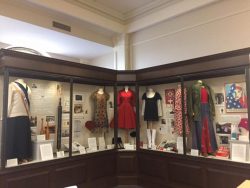 As a student assistant for Special Collections and Preservation, I was incredibly involved behind the scenes in the research, writing, and curation of this exhibit. My introduction to the exhibit process began in Summer 2017, a year after planning had already begun by previous assistants. While a basic outline had been organized and rudimentary background research formatted, I was tasked with perusing resources to configure the best examples with which to pursue our narrative. In researching the history of women’s civic engagement at JMU, the use of Special Collections material was invaluable to the process. The yearbooks The Schoolma’am and The Bluestone along with the school newspaper The Breeze were the most valuable aids from which to draw information about the everyday lives of students and staff. Other sources such as the Patricia Chalfont Collection or the Student Government Association Collection gave us ephemera from which the roles of women on campus can be deciphered.

Something which we struggled with in our research was lacking evidence of direct activism at our school, particularly from the early years. As a small female teacher training school located in the rural Shenandoah Valley, students and staff were far less likely to be loudly engaged politically. However, correlation between the switch to full coeducation in 1966 and an obvious shift in approach towards women’s rights at JMU appeared in our research. Discussions regarding the roles of women were held openly and far more frequently than before. The breadth of content available after the shift in the late 1960s led to more information for our researchers to uncover and a more in-depth look at the direct effects of and engagement with feminism by our campus community in recent decades. 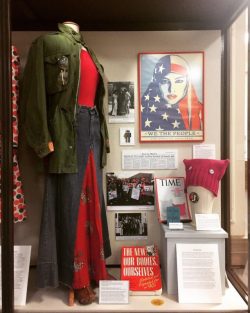 One thing which we wished to communicate was the development of feminism throughout time, showing how the movement has changed. We realized early on that in order to properly approach the topic of women’s rights over a century, we would need to delve into the “waves” of feminism, thereby dividing the exhibit into time periods. The history of JMU is perfectly situated to reflect these waves, as our growth as an institution has correlated with the feminist movement’s increase in political power and popularity.

The exhibit is divided into five sections as such: The Early Years (1908-1919), The Twenties, The Fifties, The Sixties/Seventies, and the Current Era (late 90s-2000s). The Early Years and The Twenties both investigate the suffragette leanings of students at the school and consider the effects of the 19th amendment’s ratification. The Fifties presents a college immersed in past traditions and expectation for women, while The Sixties/Seventies explores how women became far more politically active on a rapidly changing campus. The Current Era reflects upon the impacts of Fourth Wave Feminism on student and staff civic engagement. The encompassing history presented in The 19th Amendment: A History of Women’s Rights at JMU advocates for and encourages engagement by women in our campus community, a continuation of the rich legacy left behind in our campus memory and exemplified through this exhibit.