The Blackley Brownie in Focus

Brownie cameras gave birth to amateur photography in the early 20th century. This one from the Blackley Collection is a No. 2 Folding Autographic Brownie dating from 1917-1926 and it’s in especially great shape.

First produced in 1900, early Brownies were made of cardboard and the cheap material allowed them to be sold for only $2.00. Ours is a later edition made from aluminum and would have been costlier but longer lasting. Because these new cameras were inexpensive and small they could be used by anyone and were even marketed towards children. Soldiers often took them overseas because they were easy to carry and use in the field. No one had never seen anything like them and incredible accessibility of this new photography tool revolutionized news and the way people saw the world.

100 years later the value of using an image to telling a story has only increased. “You have to see it to believe it” and “A picture’s worth a thousand words” are phrases our society has taken to heart during the age of social media. The waves of visual imagery we experience in nearly every moment of our daily lives can be traced back to tiny cameras like these that first put the power of the image in the hands of everyday people. 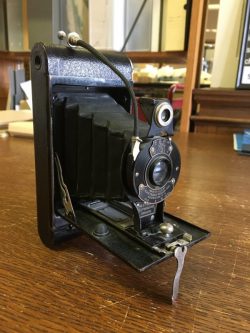 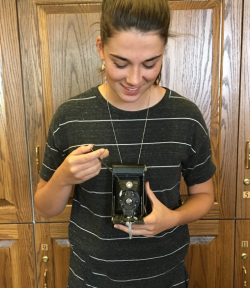 The Brownie in action!

Unlike future digital cameras, the Brownie was designed to sit upright and take portraits just like a camera phone. It could be held or set on a flat surface and propped up with a small metal foot at the end of the lens door. The viewfinder is located above the lens and allowed the photographer to look down and see what was in the picture frame from above. As they have aged, the viewfinders on some cameras have become cloudy but the one on this camera is still clear enough to see through. Our camera even still has its functioning shutter release cable, an attachment that allowed for taking clearer pictures than manually flipping the shutter. 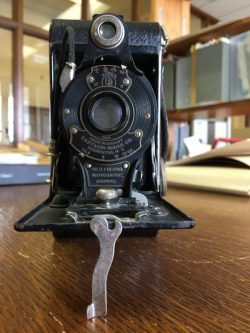 Close up of the front of the camera, showing the adjustments for shutter speed (above the lens) and aperture (below). The circular lens at the top is the view finder.

The most exciting part of this style of camera is the “Autographic” feature which allowed users to ‘write’ on their photographs. On the back of the camera is a metal flap and attached stylus. Under the flap is a black surface where a note could be written using the stylus that would then appear on the next photograph taken when the film was developed. The special autographic film had a layer of carbon on a strip at the end of each photograph that was scratched off by the stylus. By leaving the metal flap open for a few seconds in sunlight, the carbonless area developed revealing the message in white. 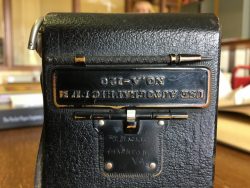 The autographic flap and stylus (Below that you can see where Charles Blackley scratched his name and hometown!) 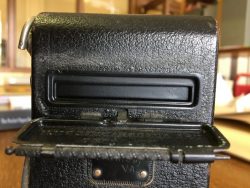 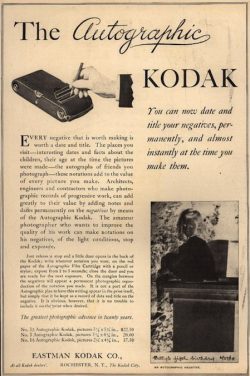 An example of how the notated images would look. The Autographic Kodak. 1914. Advertisement from the Duke University Libraries