“The entire nation weeps at the tragic death of the great and good Garfield.”

September 19, 2016 marks the 135th anniversary of James A. Garfield’s death. The 20th president of the United States died September 19, 1881 due to complications from an assassination attempt two months prior. Charles Guiteau, a lawyer and writer who was disgruntled that President Garfield had rejected his numerous job applications (including ambassadorships), shot Garfield on July 2, 1881 at the Baltimore and Potomac Railroad Station in Washington DC. President Garfield died two months later; Guiteau was convicted of his murder and hanged on June 30, 1882.

Today we honor President Garfield with excerpts from a recently acquired nineteenth century diary and account book from Augusta County farmer, John A. Frenger. Frenger’s diary and account book (1881-1884) is similar to your typical farmer’s ledger and includes weather updates, harvest totals, household and farm expenses. What makes Frenger’s diary extraordinary is that, in between updates on drought conditions and general town gossip, he writes at length about President Garfield’s assassination attempt at the hands of Charles Guiteau, his progress over the following months, and his eventual death.

The relevant excerpts have been pulled from their respective entries and transcribed below:

President Garfield was assassinated yesterday in Washington yesterday just as he was bording [sic] the cars by a man by the name of Grottoe [sic]. Mr. Garfield is my special friend and his sad end I can hardly bear. Tears do flow when I think of the great and good man. May God take care of him is my heats desire.

I am truly happy to record the fact that President Garfield is improving and is likely to recover.

Our President continues to improve.

President Garfield is growing worse. I fear he will die.

President Garfield not well yet.

President Garfield was taken to Long Branch on the 6th. At last account he was doing well and the indications are now that he will get well and I hope so. 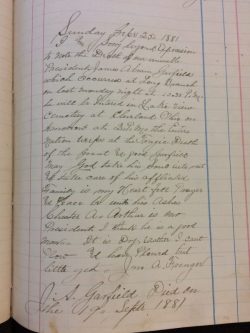 I am sorry beyond expression to note the death of our venerable President James Abram Garfield which occurred at Long Branch on last Monday night at 10:35 P.M. He will be intered [sic] in Lake View Cemetery at Cleveland Ohio on tomorrow at 2 P.M. The entire nation weeps at the tragic death of the great and good Garfield. May God take his soul into rest and take care of his afflicted family is my heartfelt prayer and peace be unto his ashes. Chester A. Arthur is our President. I think he is a good man. J. A. Garfield died on the 19th Septr. 1881.

Guiteau President Garfield’s Assin [sic] is convicted and must suffer the penalty of his crime on the gallows.

It is one year today since Garfield was shot. Guiteau was hung on Friday last for assassinating him.

The John A. Frenger Diary and Account Book, SC 0008 is available for research during Special Collections’ normal operating hours (Monday –Friday, 11:00-4:00; or by appointment).