If you happen to be traveling through the North River Gap of Augusta County, Virginia, you wouldn’t think there was anything unusual about the area. However, something might catch your eye: a small, yellow building. This is in fact the old Stokesville Passenger Depot, one of the last remaining pieces of a truly extraordinary town. A town that vanished. 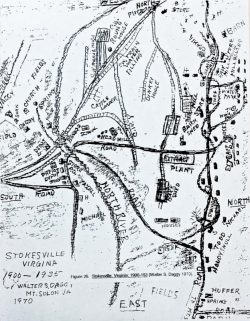 Although there is no clear date for the establishment of Stokesville, the name came into use by 1901 with the development of some saw mills and the Dora Coal mine. Around this time, the Stokes family of New York acquired thousands of acres in the North River Gap, as well as a majority interest in the local Chesapeake Western Railway, which they planned to extend through the Gap. Once this was announced, the town of Stokesville exploded, growing rapidly to reach a population of 1,500 by 1905.

However, between 1910 and 1913 the mills and coal mines that had built the town began to leave as timber dwindled and the quality of the coal was found to be inferior. The Chesapeake Western Railway eventually abandoned service to Stokesville in 1930. Then a flood in 1949 destroyed much of what remained. All that is left is the Stokesville Passenger Depot.

JMU’s Special Collections serve as one of the largest repositories of information on Stokesville. Most of it is contained in reports compiled in the 1990s by JMU’s Department of Sociology and Anthropology under the direction of Dr. Clarence Geier. “Stokesville; Augusta County, Virginia: Early History and Town Plan” covers most of the history of the town and has some of the most useful visuals, including historic photographs, projected layouts of the town, and renderings of what some of the demolished buildings once looked like.

Kay Veith’s “North River Gap-Stokesville, Augusta County, Virginia: A Selected Genealogy and Oral History of Residents” provides many other valuable insights into the social and cultural history of the town, while Charles Grattan Price, Jr.’s Crooked and the Weedy: A History of Virginia’s Chesapeake Western Railway tells the story of railroad.

Special Collections also hold some manuscript collections relating to the commercial elements of the town, such as the McHone Brothers (LLC) Collection of Houck Tannery Records, 1870-1913, and the Chesapeake Western Railway records, 1928-1982, which provide insight to the amount of resources, particularly tanbark, extracted and shipped out of the area. With resources like these, historians can build a picture of the development and demise of the mountain town of Stokesville.