The Mystery of Our Oldest Book

This is the decorative spine on the binding of our oldest complete book in Special Collections.

De raptu Proserpinae tells the story of the abduction of the goddess Persephone as told by the Latin poet, Claudius Claudianus.

Claudian, who lived at the end of the fourth century of the Common Era, never finished his epic poem, but it was still treasured for centuries, remaining popular well past the Renaissance.

This edition has a lengthy commentary by the Italian Humanist, Janos Aulus Parrhasius, who lived in Milan around the time the book was printed. 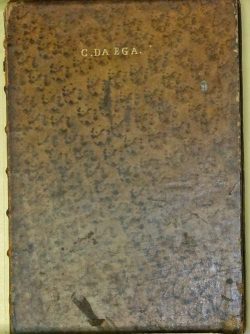 We don’t know much about the provenance, or ownership history, of this book. The gold-stamped letters on the front might indicate that it was once owned by someone who used this mark on other books that have been sold on the antiquities market, perhaps a Count of Ega from Portugal, a title that was created in 1758.

Nor can we say all that much specific about when or where this book was published. The shape of the typeface makes it pretty clear that this Latin book was printed in Italy in the sixteenth century. But neither the first nor the last page have any sort of date. Someone has written in 1505 in Roman numerals and the Latin term for Milan on the titlepage, but the inscription in English above puts that in question. 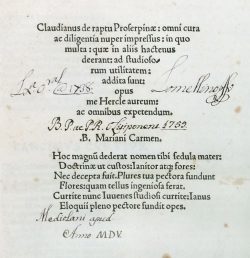 It was common to put the publication information on the last page in books during this period, but ours does not say anything other than, THE END. PRAISE BE TO GOD. 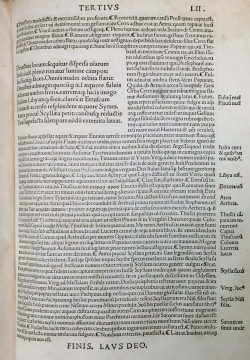 Either way, this book is about twenty years older than the next oldest complete text that we have in Special Collections. As you can see, the Renaissance commentary takes up most of the pages, but some sixteenth-century reader still had more to add in the margin. It clearly was a beloved book through the centuries, and we are very glad to have it available for JMU.